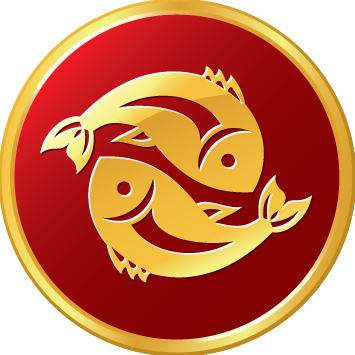 Pisces uses the qualities he got from mutable group to recognize and correct the feelings of the people around them. He is the communicator of the variable signs. Since the fish are from the water group at the same time, they are related to other people, they listen to their troubles, they lavish their backs and they are useful for their works. The ability of Pisces to adapt is so developed that it can take on the characteristics of the people who try to help and resemble people around them. Sometimes he can even confuse where he ends up and where the other person starts. He has taken over the suffering of the other person so that even after the problem of that person has been solved, Pisces can not throw it over himself. If you have consulted on any topic to pisces, be sure to inform him about his progress, or he will still be worried about you at the same point. Do not exploit the goodness of him and know the value of the Pisces.
Pisces - the twelfth zodiac sign, under the control of Neptune which governs the dreams, the fog, the visions... In astrology the twelfth house symbolizes hidden enemies, subconscious and troubles. Pisces are from a water group and of mutable quality. Pisces reflect many of the attributes that their planet Neptune gave them.

The Pisces have a soft, patient, docile nature. Pisces with generous personality are friendly, well mannered, kind, compassionate, sensitive to people's emotions. They approach the suffering people with a genuine sympathy and benevolence. Because of these features, they have a great popularity. The Pisces have a structure that is easy to get along, is compassionate, strong and outward, and does not threaten people. Instead of directing and changing people and circumstances in their surroundings according to their own desires, they accept them as they are. Instead of taking the initiative and trying to solve the problems, they patiently wait for the problems to resolve themselves. They do not like to think about their own problems, they are more interested in the problems of others.

The fish do not care much about the practical things that are happening in this world. They have a tendency to pretend to come from another world against the practical problems of life. Sometimes seems to be very emotional rather than rational, very impulsive instead of being intellectual. Pisces are always thought to have a great potential for creativity. And it is true. They are really very creative. On the other hand, they do not like discipline and limitation. Strict office hour jobs are not for them. They usually want the established status quo because they do not have the energy and motivation to oppose it. Their rebellion against the system is isolated and personal. Pisces tend to withdraw to a world of dreams.
Because they are artisticly very creative, they find satisfaction, sometimes fame and monetary rewards in their dream world. The Pisces are variable and intuitive. They have quick grip, good listening. They easily perceive new ideas and atmospheres. All these features enable them to have a considerable creativity in the field of literature, music and art. In addition to these, Pisces have psychic abilities. This ability also facilitates the right choices in some subjects. It's like they're being whispered beyond a foggy wind. Anyway, the Pisces see the world behind that foggy curtain. Even the Pisces, who can not express themselves creatively and have no chance to be able to express themselves, are much more sensitive to lovers, to the beauty in nature and art than an ordinary human being. It has beauty instincts. As a cat loves comfort and taste, they also like comfort and luxury, miss distant, exotic places, and search for new excitement.

Pisces are not egoistic in personal relationships. They give more than their friends demand. They are sexually susceptible, sometimes they are asexual. Some Pisces want their partner to ring within their souls and minds rather than their bodies. Unfortunately, currency lovers who often confuse them about it. If they get married to a partner who perceives sexuality with a rude understanding, they may be unhappy if they get together. But they already do not have a lots of loyalty, they are not home-loving, and loyal.

They want to work on their own in business. If they can not work on their own, they will be happier if they work under someone rather than a manager. Their abilities are individual. They can be particularly successful in advertising. They think they can not handle a larger department than a small department, and they are always afraid of a crisis and not managing it.

They can be good secretaries and librarians. Sympathy in nature allows Pisces to be successful in jobs such as nursing, veterinary care, and charity. The pisces have a passion for mental affairs. They love faraway lands, with strange names. For this reason they can be sailors and travelers. Many known architects and lawyers also are Pisces. If their creative abilities, their ability to imitate joined together their capacity to perceive other people's emotions, the Pisces can achieve great success in the world of stage and cinema. Their psychic and spiritual qualities can lead them to clergy. They may also be astrologers, psychics and mystics. In catering, they can be successful as a chef. There are some good detectives who are Piscess too. The reason for this is the capacity to imagine themselves as a criminal with great ease. They can easily sense how a criminal's mind works. When technical issues are discussed, they are successful as an anesthesiologist. They can work very well with liquid, gas and plastic. They can not concentrate very easily on a project because they are vivid and variable. For this reason they can do a lot of work at same time.